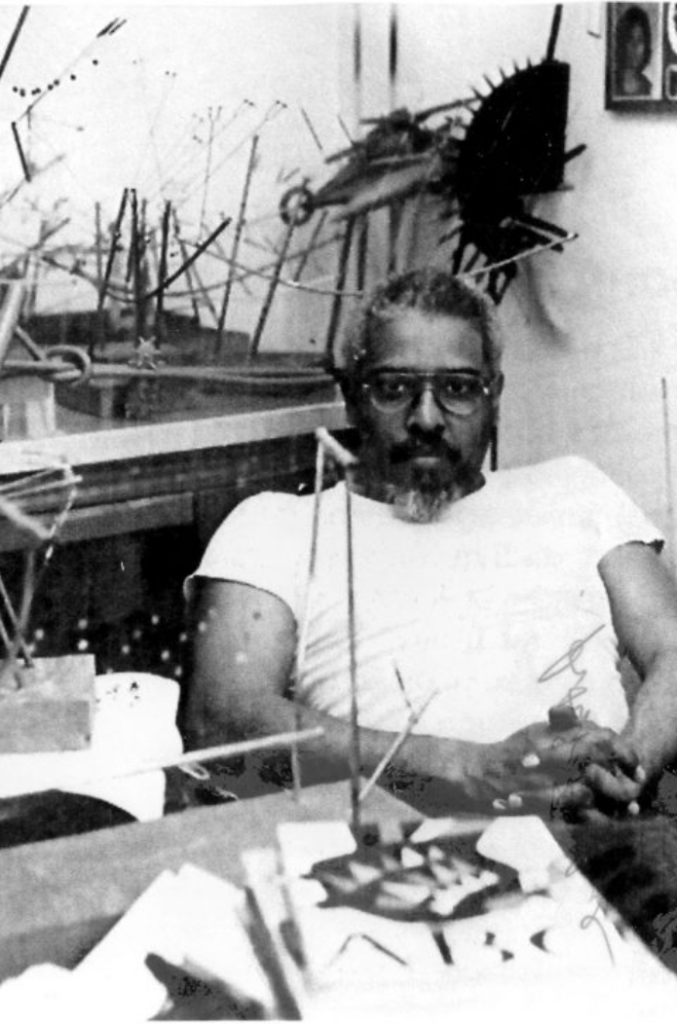 More Brandywine programs were introduced in the 1980s and 90s to demonstrate the value of visual art and instruction in community development such as the Guest Artists in the Schools and summer youth employment programs. Notable achievements include additional “art park” collaborations with the Pennsylvania Horticultural Society, the “River Bottom” performance piece at the “Aquarium” mural project by Jonas Dos Santos in the Point Breeze Community, the painting of murals on construction site barriers, and the placement of student-designed billboards across the city.

​Over the years, the mission of the Brandywine Workshop and Archives (BWA) has evolved as evidenced through its programming such as the Visual Artists in Public Service projects, artists in residence series, national and international exhibitions, artist exchanges and a national network of “Satellite Collections”.

Founded in 1972 as the Brandywine Graphic Workshop, in the Spring Garden neighborhood of North Philadelphia— a low-moderate income predominantly Black and Hispanic, working class community —as a collective of artists and art teachers, Brandywine was incorporated as a 501 (3) tax –exempt cultural institution in 1974. These first years were spent in facilitating hands-on work with local teenagers and young artists who produced limited edition screen printed fine art.

Early Visiting Artists-in-Residence projects were started in 1975 working with the abstract expressionist artist Sam Gilliam. In 1976, BWA received its first grant from the Pennsylvania Council on the Arts for the Romare Bearden print project. That same year, Bearden was presented Brandywine’s first Lifetime Achievement Awards (formerly the James Van Der Zee Lifetime Achievement Award) at the Philadelphia Museum of Art. During the award’s early history, artists Richard Hunt, James Wells, and Elizabeth Catlett were among those honored.

Brandywine’s community outreach program, Visual Artists in Public Service (VAPS) ran from 1977-1980 with support from the Comprehensive Employment and Training Act (CETA). The program grew from an initial 18 artists employed in communities across the city to a total of 38 per year by the end of the three –year program. Artists were assigned to teach classes in painting, printmaking, drawing and ceramics; they also designed and painted wall murals and introduced the concept of “artparks” complete with murals, landscaping and furniture in collaboration with the Pennsylvania Historical Society.

A subsequent iteration of the program, Philly Panache emphasized art to advance community redevelopment and operated throughout the 1980s with support from the Philadelphia Department of Licenses and Inspections and local foundations. Brandywine staff, led by Clarence Wood, then a board member and part of the staff at the Urban Outreach office of the Philadelphia Museum of Art, helped to develop the program utilizing former CETA artists. Projects included murals, trompe l’oeil panels in vacant property windows and doors, landscaping and sculpture on vacant lots. Many of the projects were executed with support from the Point Breeze Federation in South Philly and featured designs created by established visiting artists such as Jacob Landau, Keith Haring, Percy Martin, and the Pioneer Mural Group from Swansea, Wales (UK).

Expansion of National and International Presence

By 1980, the Brandywine Workshop moved to 1520 Kater Street in South Philadelphia and started the Offset Institute to advance the use of commercial presses in creating new, original lithographs. As the artist residency program reached a high of 30 artists per year, the Workshop also continued to increase its engagement with national and international organizations.

The establishment of the Offset Institute at Brandywine became a highly distinguishing factor in gaining recognition for quality, innovative work and attracting nation-wide attention. In the mid 1980’s, BWA started traveling exhibitions under sponsorship of the Smithsonian Institution’s Traveling Exhibitions service with more than 30 sites visited over four years. Late in the 1980s, BWA traveled its own exhibit, Abstraction in African American Printmaking, to six venues nationally. It was at this time that BWA started a cultural exchange with Wales, UK (1988-1992) bringing muralists, graphic artists and curators to Philly and sending artists-printmakers to Cardiff and Swansea Wales. The program concluded with a major exhibition Collaborations, an exhibit of works from six Philly print workshops, at the Swansea Museum. Later, the exhibit went to the Uffizi in Florence, Italy and the Carnegie-Mellon University Gallery in Pittsburgh.

By the late 1980s, the Visiting Artists- in- Residence program was scaling back to about twenty artists per year to allow for more innovation with materials and processes — collage, dimensional and mixed –media prints. The artists then included Jules Olitski, Alvin Loving, Kenneth Noland, John E. Dowell, Jr., Jacob Landau, William T. Williams, Melvin Edwards, Keith Morrison, Betye and Alison Saar, Barbara Chase–Riboud, John T. Scott, Camille Billops, Martha Jackson-Jarvis, Benny Andrews, Juan Sanchez, Edgar Heap of Birds, and a host of Asian, Latino and Native American artists, all through a series of annual highlights of diverse artist communities. Many of these artists’ works formed the basis for future gallery exhibitions. By the 1990s special BWA exhibitions were traveling abroad— Africa, South America, Middle and Near East —under the auspices of the U.S. State Department’s overseas art programs. In 1993, BWA opened the Printed Image Gallery at the newly renovated historic firehouse at 730 South Broad Street, just a few blocks from the Kater Street location and situated in the middle of the newly formed Avenue of the Arts, Philly’s downtown cultural District. This was the first new art facility to open on the recently dedicated arts district. 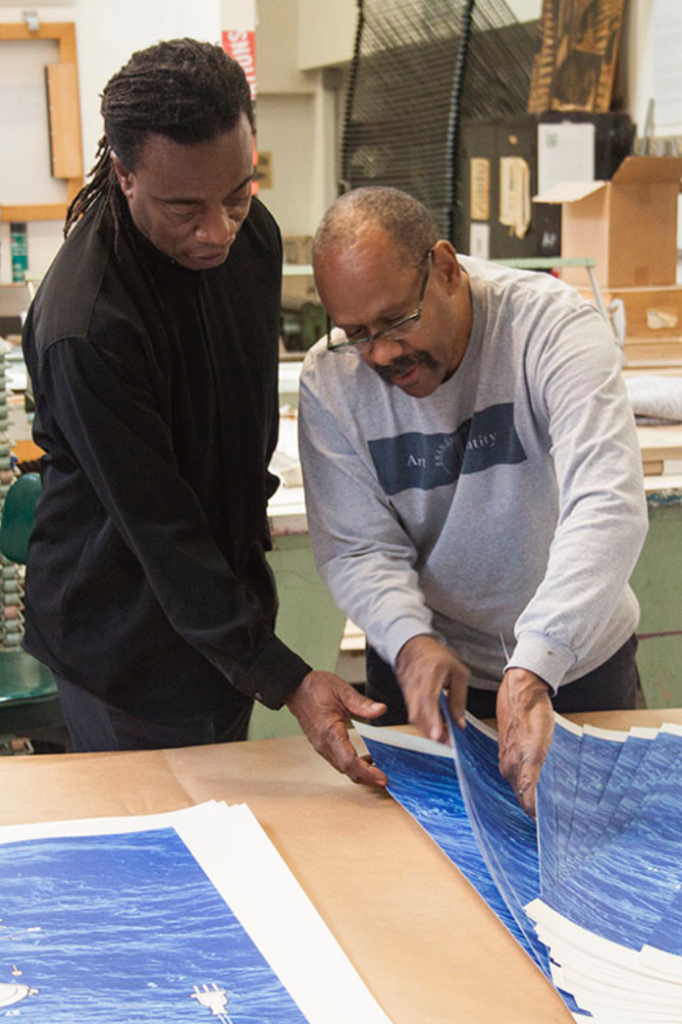 In 1997, the newly built, custom Print Shop Building at 1404-1410 Pemberton Street (aka 728 S Broad Street) and housed the education and computer/video training programs, Offset Institute, and formal print archives. After-school instruction in video, web design and computer graphics resulted in new funding support began and the focus turned from outreach into communities to the hosting of programs at Brandywine’s mini-campus and recruiting high school students who would travel to BWA from across the city. The goal was to establish Brandywine as a valuable cultural resource to the city with easy access to its mini-campus on the expanding Avenue of the Arts, South. Between 1993 and 2003, over 330 high school students received training in digital media— graphics, videography, collection documentation— framing, and exhibition planning during after-school and summer workshops. As a result of the editions being produced and our desire to promote and document diversity in the contemporary arts, BWA g=began donating prints to art museums, universities and heritage centers in the 1980’s. Brandywine continued to establish, at other institutions, collections of editioned prints from the visiting artist series for the physical preservation and documentation of artists legacies— “Satellite Collections”— which include ethnic heritage institutions, art museums, and universities. Today, there are 14 “Satellite Collections” across the country and one at the Wifredo Lam Contemporary Art Center in Havana, Cuba. They include: Arizona State University Museum Scripps College, Hampton University, University of Delaware Museums, Rhode Island School of Design Museum, Philadelphia Museum of Art, University of Texas at Austin, Warfield Center, Museum of Contemporary Native American Art and Harvard University Museums among others. Several catalogs were produced to accompany exhibits in the Printed Image Gallery— i.e, Jacob Landau, Sam Gilliam, and Paul F. Keene, Jr. Most exhibits had a guest curator who planned the exhibit and/or wrote catalog essays.

The book Three Decades of American Printmaking: Prints from the Brandywine Workshop Collection was published in 2004. With almost all the prints in the collection illustrated and a series of essays describing the history, artworks and processes, artist bios and references sources, the publication quickly became a primary resources to learning about Brandywine and the contributions to American art by people of color over the preceding 30 years. By the mid 2000’s Brandywine was working with the Philadelphia Museum of Art towards a major acquisition of additional visiting artist prints and to plan for the exhibition of those works. Full Spectrum: Prints from the Brandywine Workshop premiered in the fall, 2012 at the Museum. The exhibit opening was the highlight event of Brandywine’s fortieth anniversary year-long celebration. The celebration concluded in the spring, 2013 with the 21st presentation of the Lifetime Achievement Awards at the National Museum of American Jewish History on Independence Mall in Philadelphia. In the fall, 2008 BWA had to close the historic firehouse and the gallery exhibition programs due to facade damage, and later, catastrophic flooding. On going, BWA ran an exhibition program in the Glass Lobby of the Print Shop Building hosting installations of works by Michael Platt, EJ Herzyck, Peter Paone, Keith Morrison, Danny Alvarez, Tomie Arai, Jack Malotte, Edgar Heap of Birds, Andrea Chung, EJ Montgomery, Louis Delsarte and Samella Lewis among others. In the fall of 2017, BWA proudly reopened its newly restored firehouse and Printed Image Gallery and has since presented one-man exhibitions of prints by William Majors and Romas Viesulas (2018) and John T. Scott (2019) and initiated the ArtistNConversation galley talks, which has already presented Kakayoung Lee, Maceo Montoya, Melvin Edwards, Anthony Panzera, John E Dowell, Jr. Agathe Bouton, Cynthia Back and Willie Cole among others. 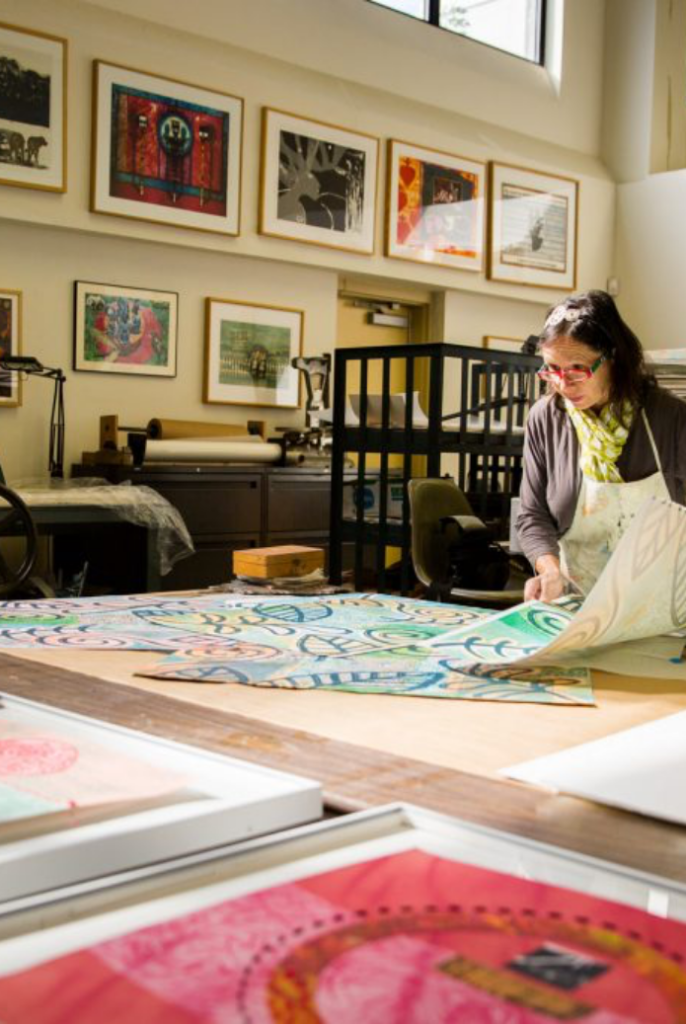 Documentation and the Changing Focus to Multicultural Education, Preservation and Interpretation

The decrease in funding for small and mid-sized art organizations and the increasing impact of technology on creativity in the fine arts, audience growth and engagement caused a strategic shift in Brandywine’s mission. Today, BWA recognizes its need to focus on building technology infrastructure, to develop content for the web-based formats to better communicate with audiences and for growing private contributions and earned income.

The organization’s name was formally changed in 2013 to the Brandywine Workshop and Archives to better reflect our deepened commitment to documentation, preservation and promotion of the permanent collection/archives.

BWA remains firmly committed to the preservation, and documentation of its collection and to the artists who participated in its residency program over the years, Today, however, with the increasing global interest in contemporary art created by Americans of color and the tools of technology rapidly evolving, BWA has expanded its vision. BWA has begun to focus on producing video documentaries of artists, especially women and people of color. And, with an eye to the future, we are building a virtual Institute for Inclusion, Diversity and Equity in Education and the Arts (IIDEEA) to connect all “satellite collections” and provide free, easy access over the Internet and smartphones to the BWA database of images, research, digital media, and educational materials. This open educational resource will launch to the public in early 2020.

A longer-range goal is to establish a “Satellite Collection” in every major geographic area of the country by our fiftieth anniversary (2022) and at least one country in Africa.

In the year 2022, our fiftieth, BWA programming will be deeply committed to art education through the website artura.org and will have demonstrably impacted the expansion of multiculturalism across the curriculum. We believe our efforts will have supported the increase in young artists of color pursuing successful careers as studio artists, and help mediate the growing need for diversity among art educators and museum professionals.

Ultimately, achieving these programming goals and expanding institutional partnerships here and abroad will ensure that we advance our mission of connecting, inspiring and building bridges among global communities through the visual arts and culture.

The Brandywine.art TM name and logo is trademark protected by Brandywine Workshop and Archives, Inc., its owner. Use by any other entity or person is strictly prohibited and will be addressed with the appropriate legal response.